These pictures are long overdue, but I guess it’s better late than never!

I took my wife to the Pierre Gagnaire Restaurant in the Lotte Hotel for our 3rd Anniversary on May 22, 2013. I knew the dinner bill was going to be expensive, but I also knew it would be our last nice, romantic dinner together before entering parenthood.

I ordered the 6 rue Balzac course (180,000 won) and Rachel ordered the Tradition Francaise course (265,000 won). Yes, you read that correctly, the total bill for the meal with NO alcohol was 445,000 won!!! Luckily, I had a good excuse for not ordering any alcohol: “My wife’s pregnant.” Had we ordered some wine, our bill easily would’ve went over 600,000 won. I was expecting to pay a huge dinner bill, so the price didn’t really bother me. Although it did bother me that the cost of the meal was the cost of a decent camera lens or lighting equipment. I know…I’m such a photographer, but I can’t help but analyze my opportunity costs in this way! We paid for the bill using our corporate Lotte card and were pleasantly surprised to get an additional 10% off.

The BIG question you might be asking is, “Was the meal worth it?” Well, my wife and I have gone to other expensive restaurants while traveling (although this was our first MIchelin-rated restaurant), and we were always disappointed. There hasn’t been a single expensive restaurant where we felt like the meal was worth the exuberant price tag. So, we couldn’t help but have low expectations. We knew Pierre Gagnaire was a Michelin-rated restaurant and considered one of the best in Seoul, but I can’t remember the dozens of times we went to some other expensive restaurants with some clever “best” marketing ploy, only to be gravely disappointed. Enough of my babbling. To make a long story short, I can genuinely say my wife and I both felt like the food was actually worth it. I never thought I’d be saying a 445,000 won meal is worth it, but it was honestly like nothing I’ve ever had before. I’m not a food expert, but it doesn’t take one to recognize the difference in taste, texture, and presentation from other restaurants. If I had to describe the food at Pierre Gagnaire, I would say it’s an eclectic mix of flavors and textures that aren’t traditionally paired together, and shouldn’t taste good together, but somehow, magically, counterintuitively, pair together extremely well! It’s like a huge explosion of flavors that dance wildly with your taste buds. Ok, I’m getting a bit carried away now. I wasn’t expecting to write such a long post…and I should definitely stop now because I’m starting to salivate at 12:40am! I honestly can’t describe every little thing we ate, so here’s a link to their menu if you’re interested: http://www.pierregagnaire.co.kr/pierre_en/menu_en.pdf

Now for the part that’s much easier than writing: posting pictures! We were eating at the restaurant for 3.5 hours, so you’ll notice the pictures gradually getting darker and grainier as I test the ISO limit of my 5D Mark II. Maybe it’s time for a 6D or 5D Mark III… 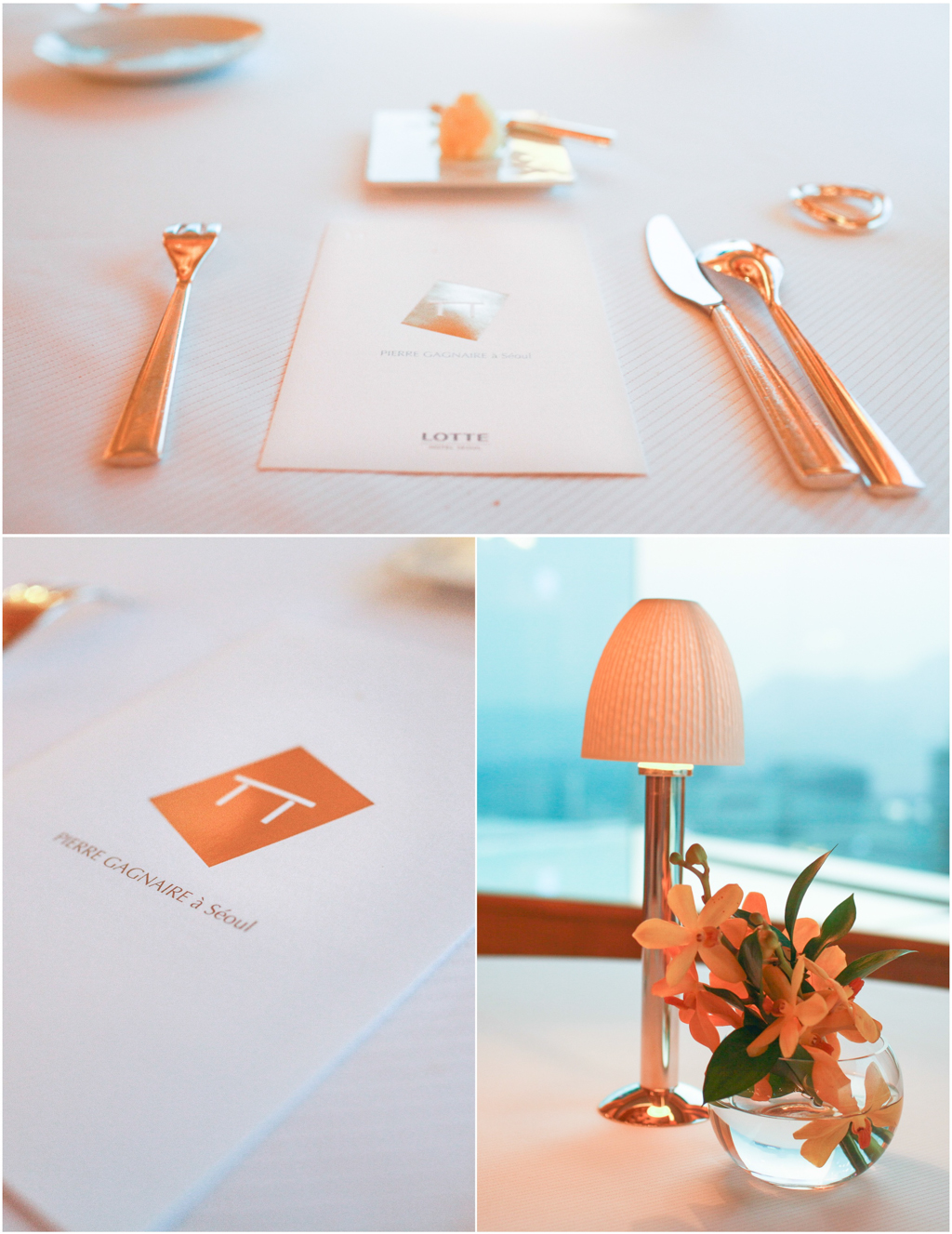 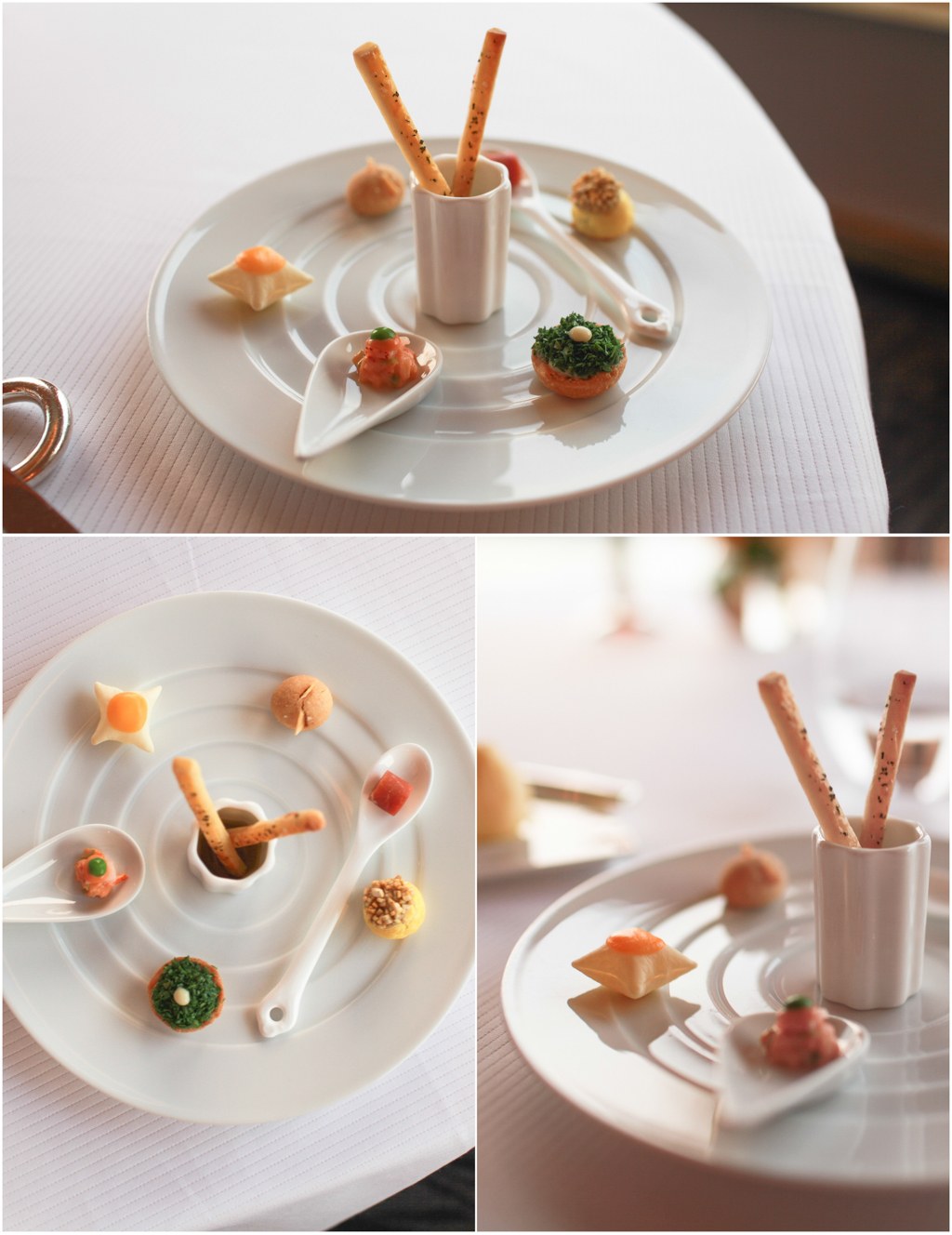 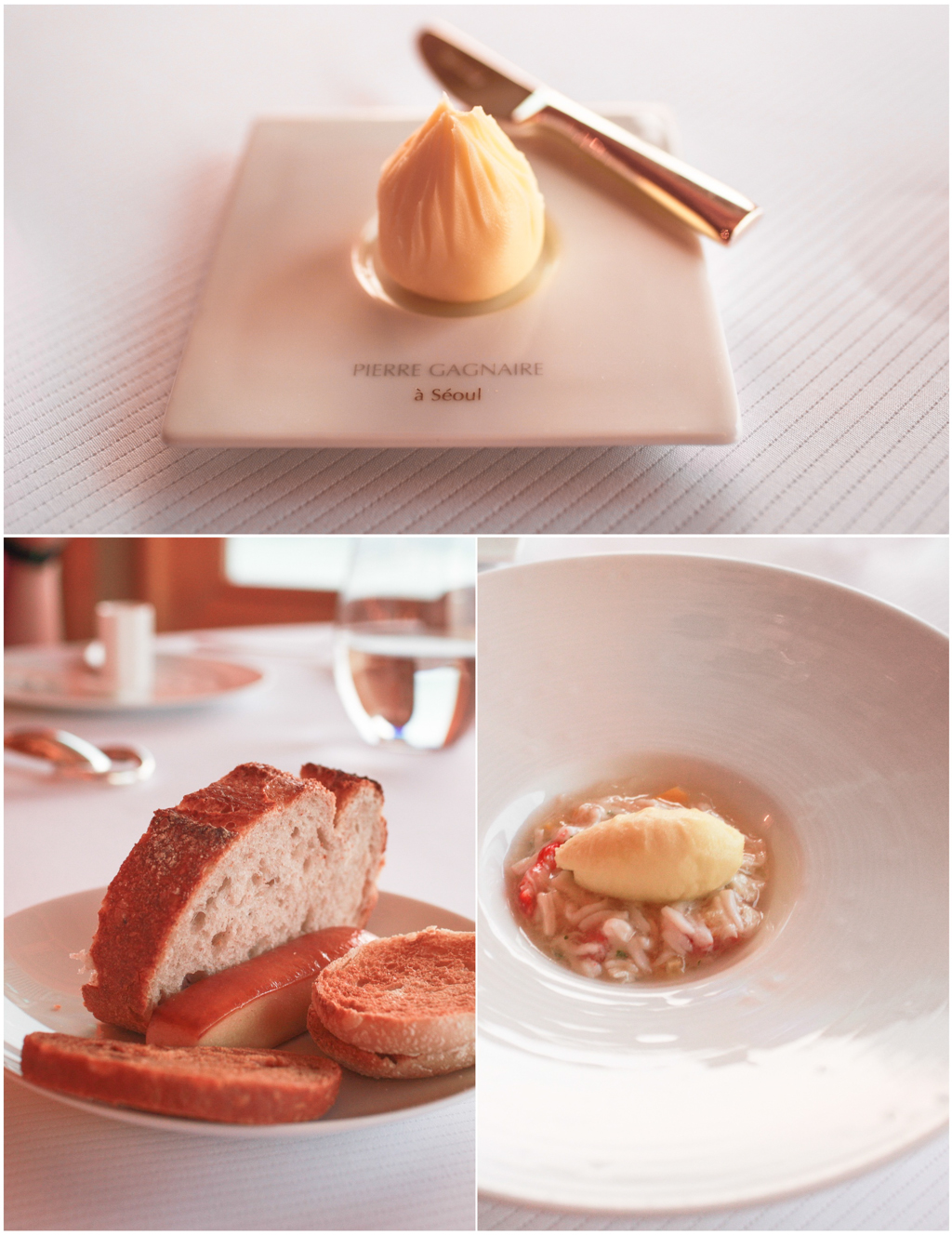 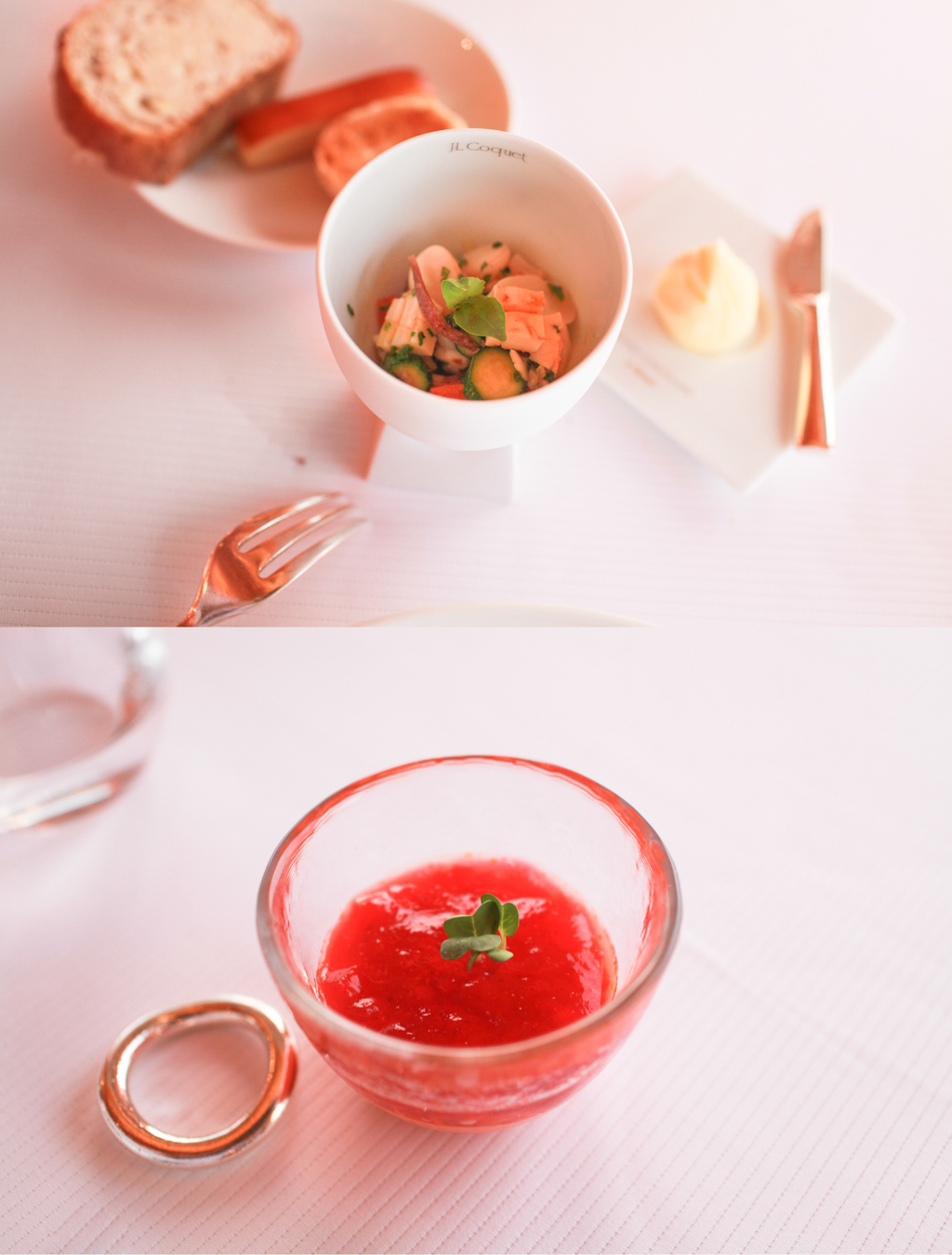 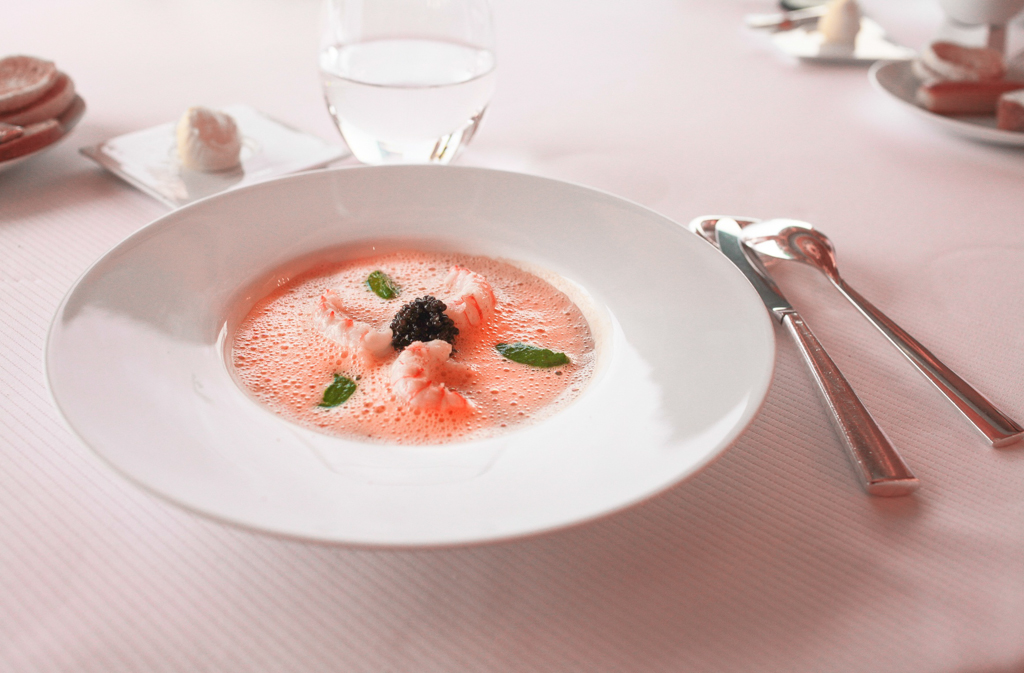 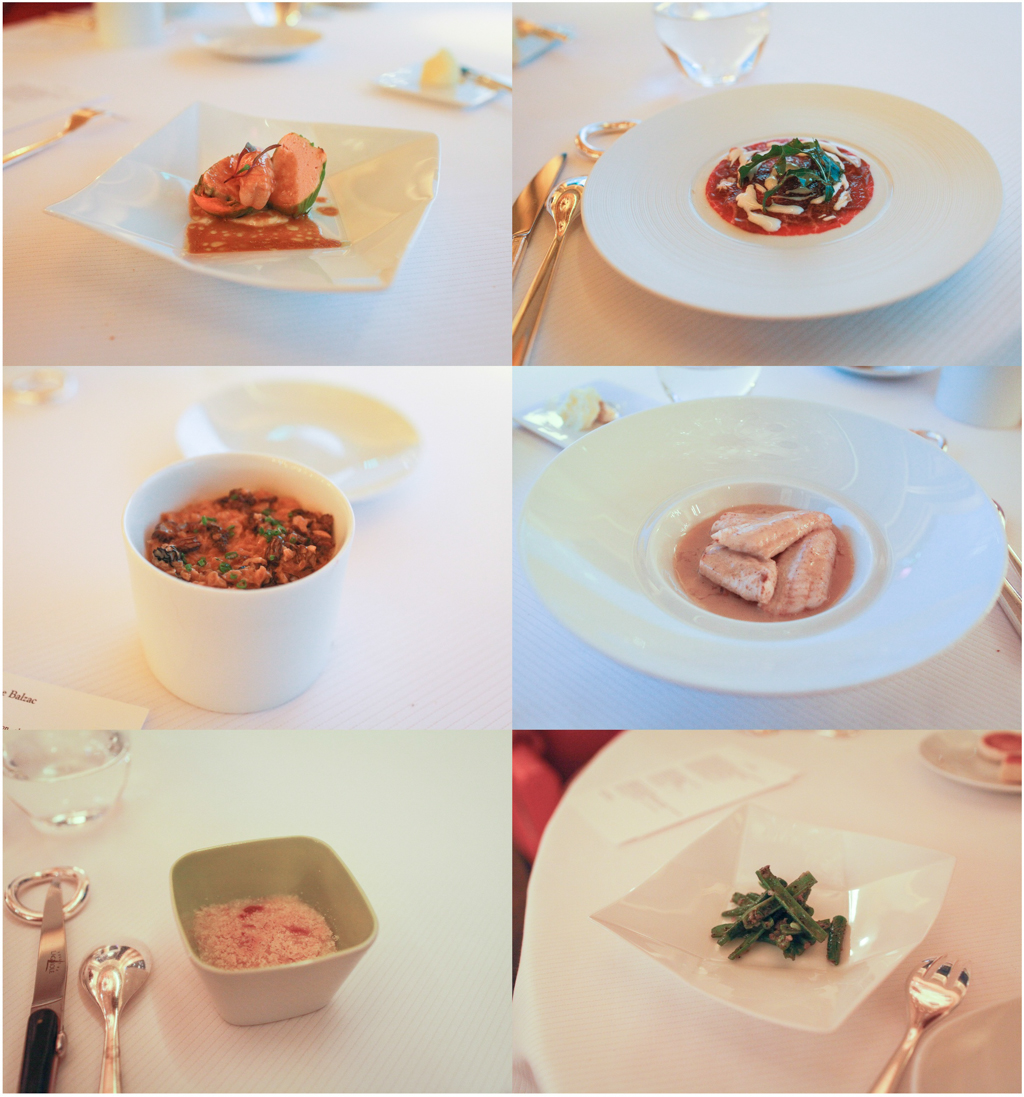 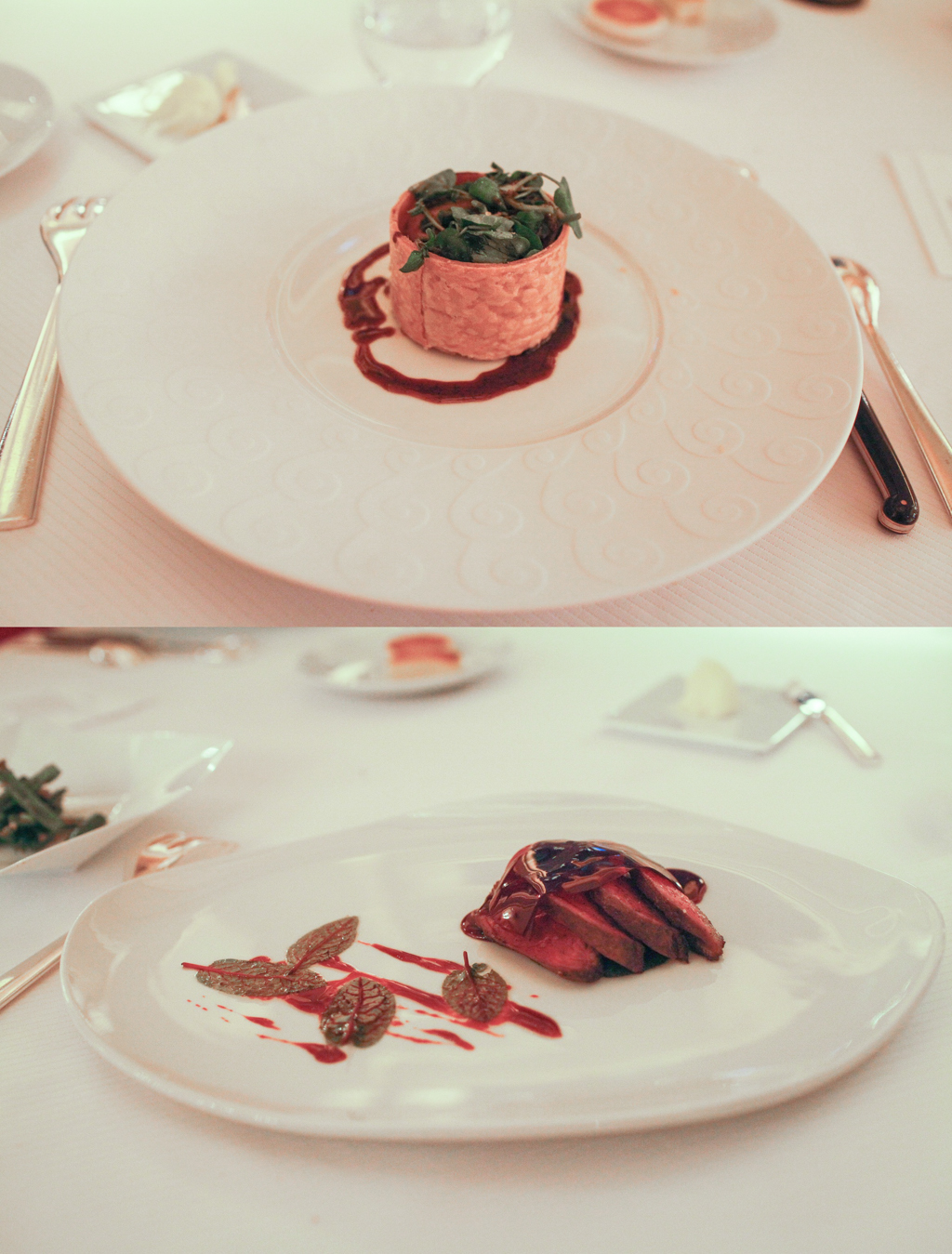 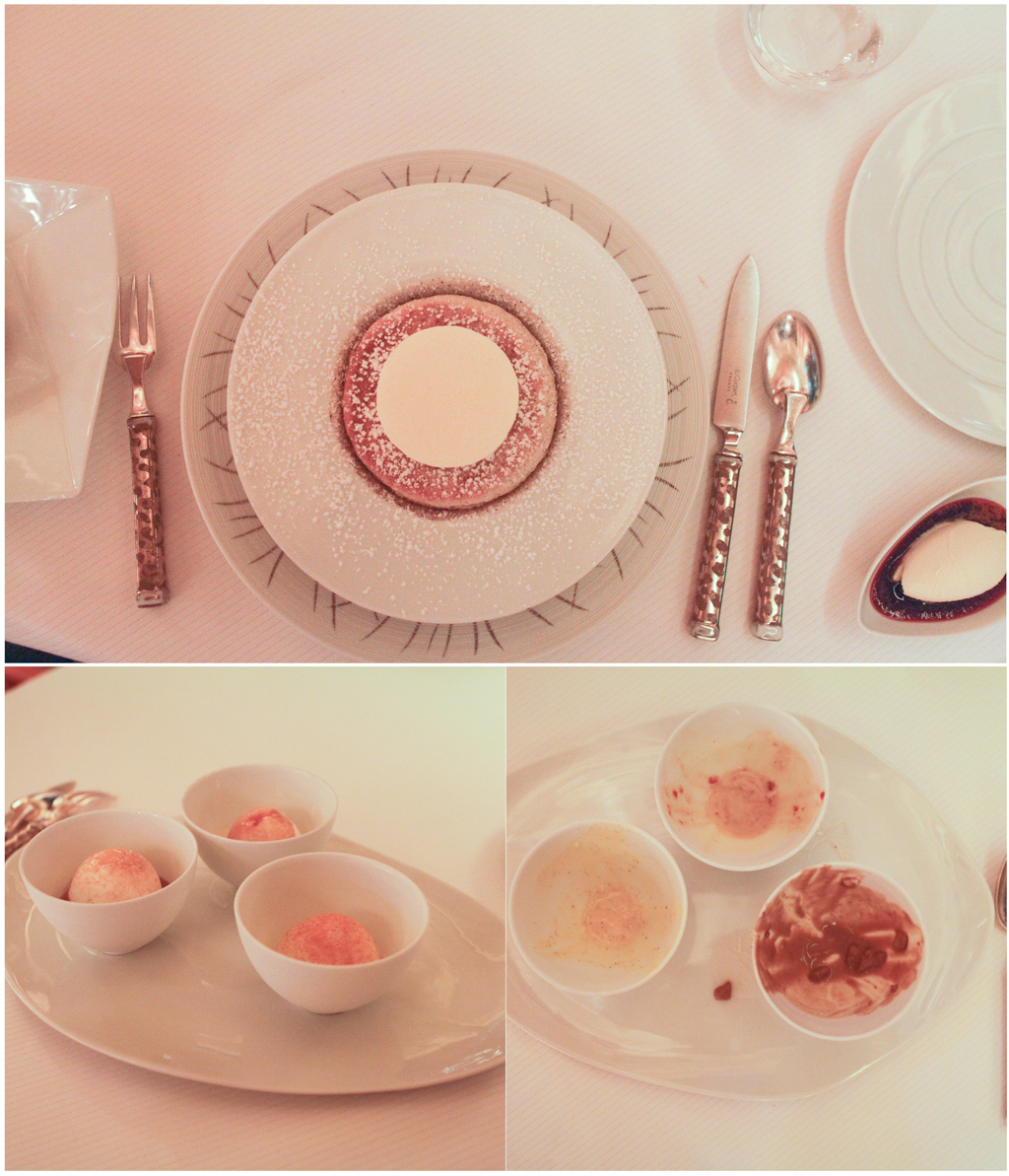 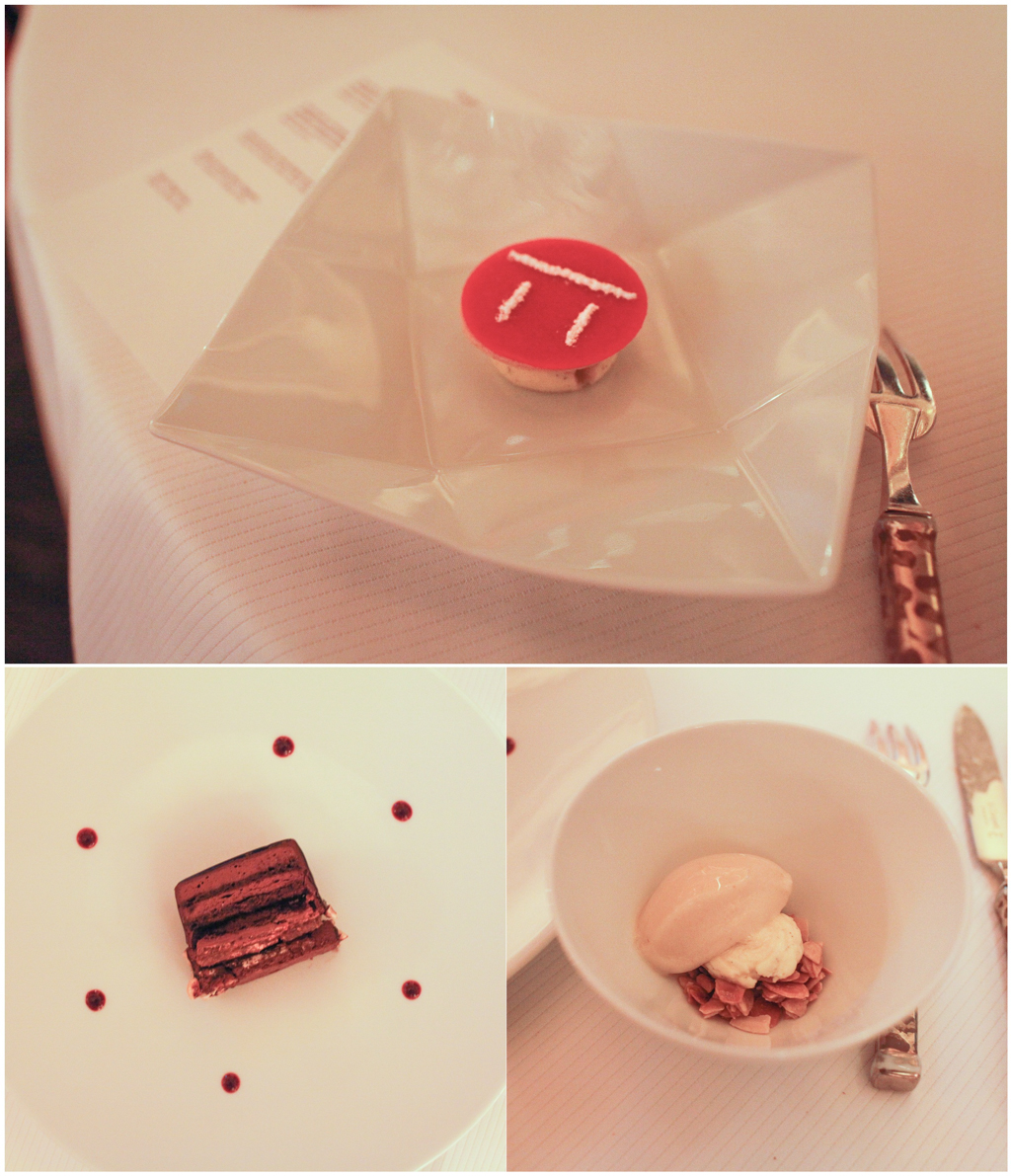 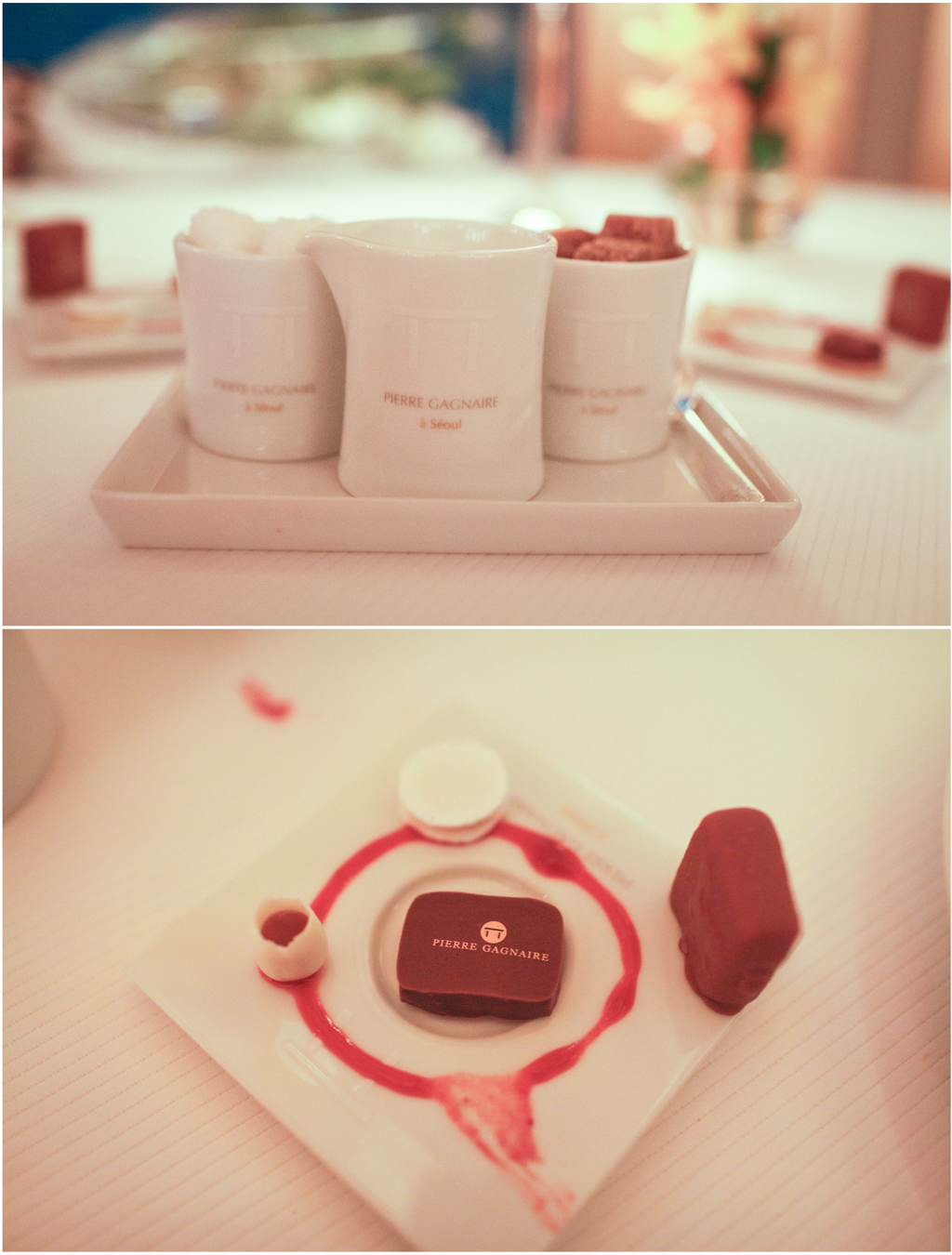 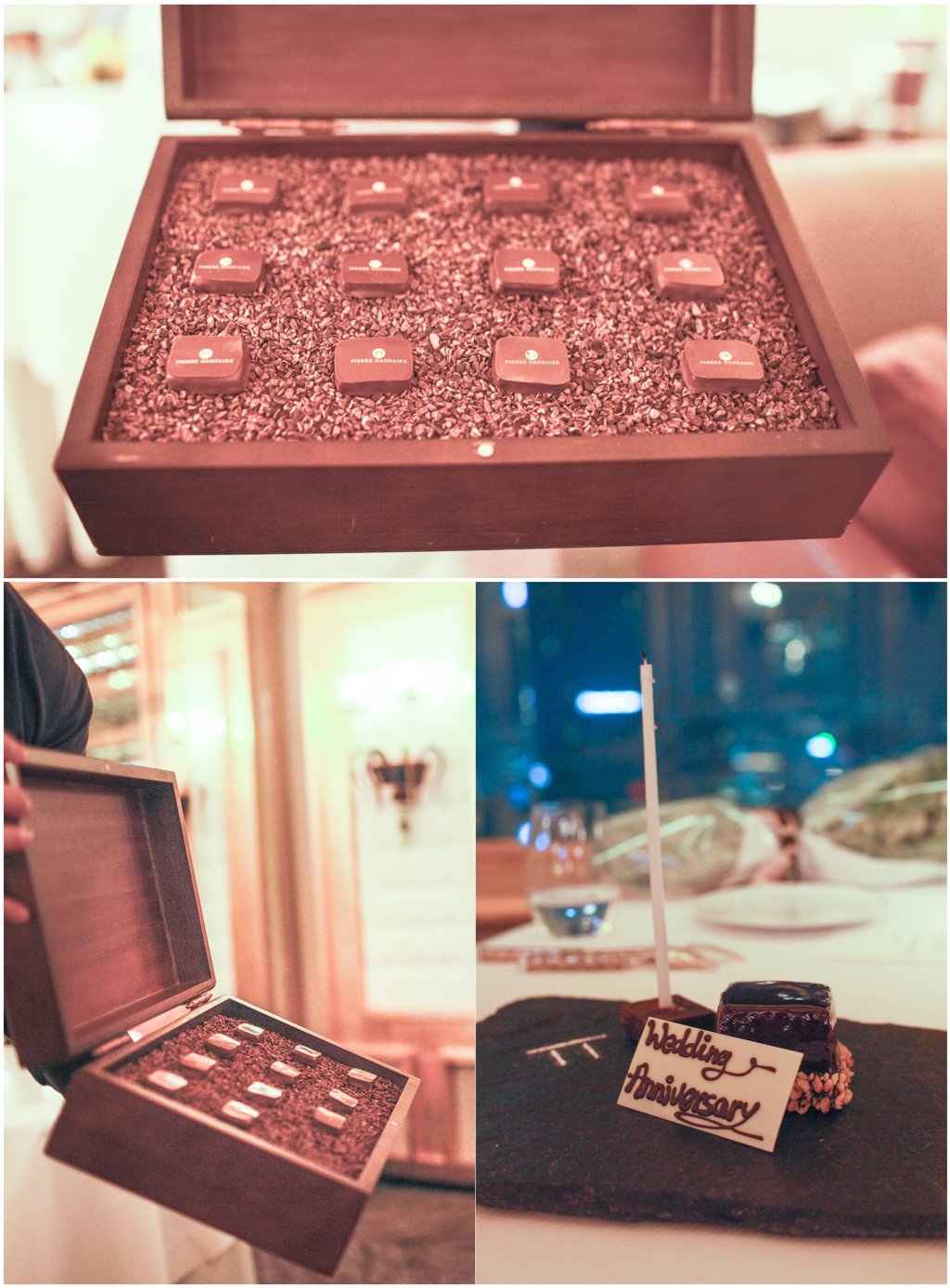 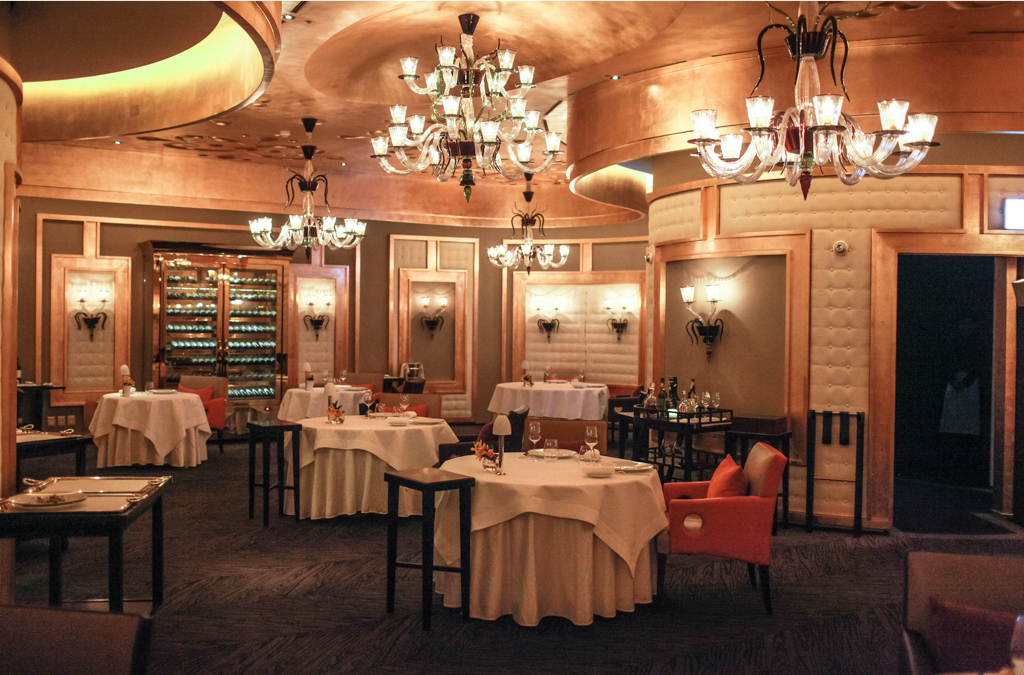